I said goodbye this week to two of my favorite Apple purchases ever: the MacBook (2016) and iPad Pro (2017). In their place sits a new iPad Pro and Magic Keyboard. But not the new new iPad that everyone has been reviewing and enjoying. Instead, I purchased the iPad that basically no one recommended when it came out. I welcomed last year’s iPad, the 11-inch iPad Pro (2020). 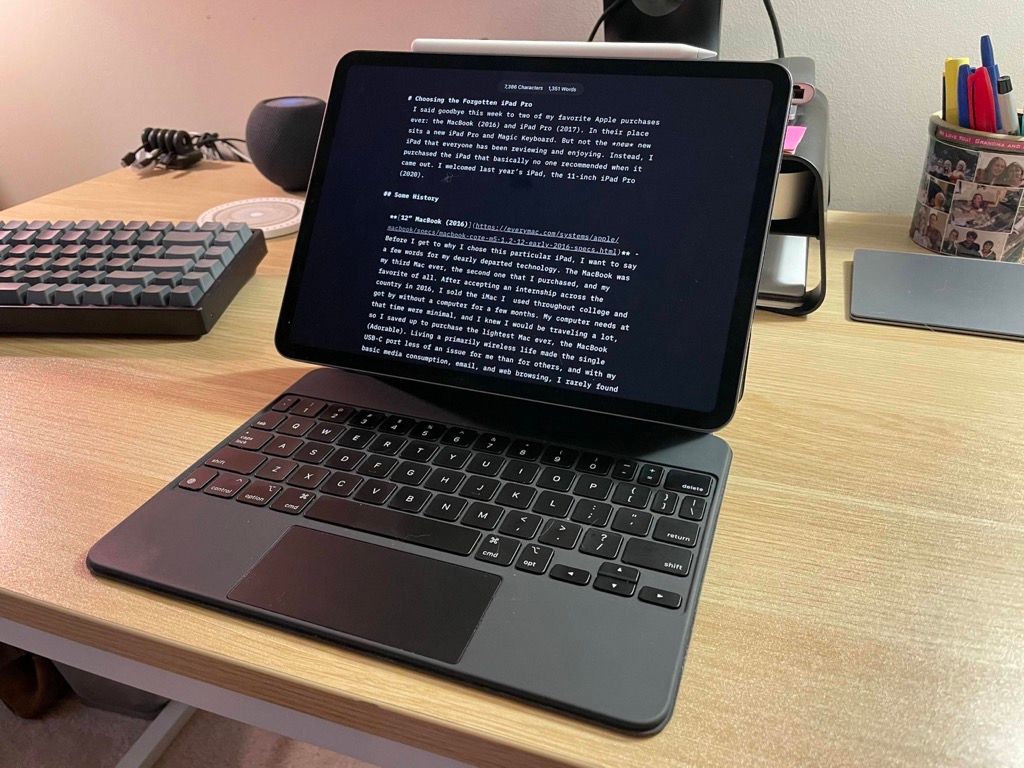 The newest member of the tech family.

12” MacBook (2016) - Before I get to why I chose this particular iPad, I want to say a few words for my dearly departed technology. The MacBook was my third Mac ever, the second one that I purchased, and my favorite of all. After accepting an internship across the country in 2016, I sold the iMac I used throughout college and got by without a computer for a few months. My computer needs at that time were minimal, and I knew I would be traveling a lot, so I saved up to purchase the lightest Mac ever, the MacBook (Adorable). Living a primarily wireless life made the single USB-C port less of an issue for me than for others, and with my basic media consumption, email, and web browsing, I rarely found that this Mac felt slow. I reveled at the sharp Retina display and the silent fanless design. I didn’t doubt Apple’s claim that this MacBook was a peek at the future of notebooks.

After my internship, I took a job that issued Windows laptops to employees, a setup which lasted all of a month. I started bringing my MacBook to work — I was more efficient and much happier. That little notebook was a trusty companion, and while it wasn’t the fastest, it did whatever I asked of it. I rendered videos, hosted multi-camera Zoom calls, powered external displays, and even tried to run Windows as a virtual machine (a task with which it did struggled, but who can blame it?). It survived summers at camp, constant travel, and precarious balancing possible only due to its impossible lightness. I loved it. Eventually, the underpowered processor and six-year-old battery showed their age, so I added an M1 Mac mini to the family but kept the MacBook for travel. I couldn’t quite give it up yet.

10.5” iPad Pro (2017) - The iPad Pro that I just sold was another well-used and well-loved device. After many years of an iPad mini 2 being my only iPad, in 2017 I was finally taken in by Apple’s product marketing and convinced that I needed an iPad Pro. I mean, just look at this ad! And it was a marvel for the four years I used it. I loved the fast Touch ID, larger high-quality screen and speakers for movies, Apple Pencil support, and the excellent Smart Keyboard. The Pencil transformed how I took notes in meetings since it was far more approachable than a laptop between me and a client or coworker, but I could still flip the keyboard around if things got serious. The iPad was my fun device that could still get work done.

Like my MacBook, the iPad Pro was used heavily, and its battery and processor issues became noticeable, then annoying. Since macOS and iPadOS are better at different tasks, I’d taken to carrying both the iPad Pro and my MacBook in my bag. With the advent of pointer support in iPadOS, I dreamed of being able to remote into a desktop Mac if needed and using only the iPad as my go-to portable again.1 As rumors of updated iPads Pro circulated, I resisted a purchase until this spring’s announcement of the M1 iPads.

The M1 iPads boast considerable gains in performance, a Thunderbolt port, and a massive increase in RAM.2 In addition, the 12.9” iPad Pro got a killer new mini-LED XDR display. I had hoped one of these iPads would be the ideal package, but damn are they expensive! A new setup would have cost a minimum of $1327 for the 11” iPad, which lacked the feature that I would have appreciated the most: that XDR display. I decided it was too much to spend on a device that would have felt out of date the moment that new display tech came to the smaller Pro, which is the size I prefer.

So I started searching for an older iPad that would still be an upgrade but down in price. I wanted the flat edge design introduced in 2018 to hook up to the Magic Keyboard and (vastly improved) second-generation Apple Pencil. But I didn’t want to purchase an iPad that was only one year newer than the one it would replace. In the end, I found a great deal on eBay for a 2020 iPad Pro with Magic Keyboard3 and some additional cases and protective skins. The sales of the MacBook and old iPad Pro covered the cost, so it felt like a true swap.

When the 2020 iPads Pro were introduced, it was rare to see a review that recommended their purchase. Instead, most reviewers concluded that the camera upgrade and one additional graphics core in the A12Z chip were too small of spec bumps to upgrade from the previous generation. Since it seemed that most people in the market for an iPad Pro had already sprung for the new design in 2018, it was a logical conclusion. But I can tell you that if you’re coming from an older generation, this iPad deserves a wholehearted recommendation.

I’m a few days into using this new setup, and I love it so far. Going from the A10X to the A12Z chip and from 4GB to 6GB of RAM was a significant upgrade, and this iPad feels zippy. The Magic Keyboard with trackpad is marvelous, and I love not having to reach up to poke at the screen all the time. However, it does lack some of the versatility of the Smart Keyboard.4 I’m enjoying having the Apple Pencil again as another input option, and I’m thankful that its magnetic charging means it’s always ready to use and less likely to get misplaced. Having the LiDAR sensor on the back isn’t useful day-to-day, but I appreciate having it available knowing how hard Apple seems to be charging toward an AR future.

Looking forward, I have no trouble predicting that this mobile “laptop” setup will last me at least until the next major revision for the smaller iPad Pro and probably beyond. Of course, I am a sucker for new screen technology, and I’m optimistic about the rumors about OLED coming to iPad, but honestly, I’m thrilled with the 2020 iPad Pro. This setup fills the needs I had of my trusty old MacBook and iPad, and the new design and accessories satiate the technology-enthusiast within me.

I’m excited to see what Apple does with the iPad line next, both in hardware and software (fingers crossed for a great iPadOS 15 update at WWDC next week), and I hope that it keeps getting ever more capable.