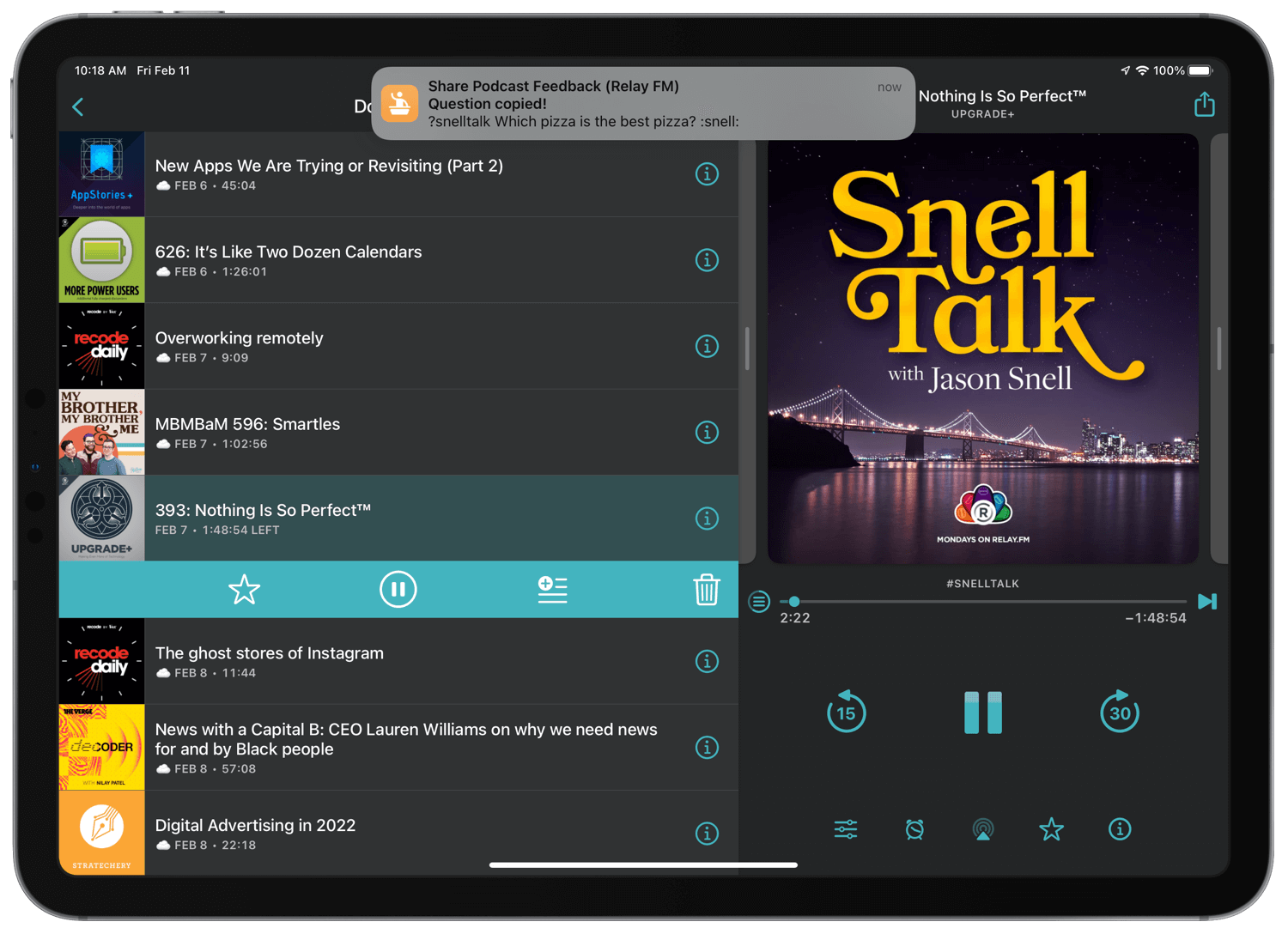 You’re listening to your favorite podcast when inspiration strikes: the perfect question. It’s concise, considered, and, without immediate action, going to climb right out of your mind. You need to get this feedback to the podcast hosts, stat. But, oh dear, you can’t recall the right hashtag to attach to make sure that it’s seen. What to do?

Of course! You whip out your newest favorite shortcut! With just a few taps, you’ve typed out your 1st place winner of a question and posted it to Twitter (or the preferred Discord channel), complete with the correct hashtag (or Discord command) to make sure it’s captured for the next episode.

This is that shortcut. Well, if you listen to the Relay FM (and adjacent) family of podcasts, that is.

I’ve had this shortcut lined up for a long time. I’d been waiting to share it here on HeyDingus until Discord supported proper Shortcuts actions, or at least a URL scheme that would let me post directly to the right channel. But alas, no such public functionality has been introduced that I can find. So instead of waiting for something that may never happen, I decided it was time for the shortcut to be available to anyone who wanted to use it, despite existing limitations. Some 68 people have downloaded this shortcut from its soft launch on RoutineHub, so I knew there had to be more Relay FM listeners who might like it, too.

I tend to launch ‘Podcast Feedback’ from a menu of podcast-related shortcuts in my Today View. Unfortunately, its use of ‘Dictionary’ actions seems to make it run inconsistently from Siri. On the plus side, it is compatible with the Mac.

I’ve broken the shortcut up into sections for following along, but you can also see it as one long screenshot here.

1️⃣ This shortcut uses setup steps, which ask the user if they tend to use the Relay FM Members Discord. This ‘Text’ action is where their answer is stored and can be changed later. The answer gets pulled into a dictionary action for use later in the shortcut. I figured a ‘Text’ action would be more accessible than having the user fiddle with a dictionary, which is why the ‘Text’ result is used solely for that variable.

2️⃣ A second ‘Dictionary’ action is used to store all of the necessary syntaxes for each podcasts’ hashtag, Discord command, and show art tag. These key values were pulled directly from the #follow-up channel in Discord and will be updated as the active podcasts change over time.

I’ve been trying to incorporate ‘Dictionary’ and ‘Choose from List’ actions into more of my shortcuts as they can sometimes cut down on duplicate steps that a ‘Choose from Menu’ action would have you create. Of course, it doesn’t always work, but it’s ideal for this kind of shortcut where the chosen item needs multiple parameters.

3️⃣ Here’s the critical step, though it takes three actions. First, an ‘Ask for Input’ action has us type in the question or comment. Then, two ‘Text’ actions format it for Twitter (with a hashtag) or Discord (with the command and show art tag) by pulling in the proper syntax from the chosen dictionary key.

Although we didn’t specify it with a ‘Set Variable’ action, both ‘Text’ actions are used later on as named magic variables. I’ve annotated them in the screenshot to show which is for Twitter and Discord.

4️⃣ After formatting the text, we do a little logic evaluation using an ‘If’ action to determine how and where it should be shared. If the user is not a member of the Discord, it defaults to sending the question as a Tweet and doesn’t give any option to do otherwise. That logic is pulled directly from that first ‘Dictionary’ action, which was populated during setup. Since we don’t want any additional action to run after the tweet is sent, we stop running the shortcut following the ‘Tweet’ action.

5️⃣ Using nested ‘If’ actions, we next check to see if the chosen podcast is either of the two shows which do not have Discord commands. ATP and Analog(ue) take public feedback using Twitter only, so we don’t need to present the option of using Discord, even if the user is a member. Again, we simply post a tweet using the ‘Tweet Text’ magic variable from earlier.

Note that you need to check the ‘Name’ parameter of the chosen dictionary item. I spent an embarrassing amount of time attempting to make the ‘Key’ parameter work before trying something else. Am I the only one who finds Key vs. Name unintuitive?

6️⃣ Now, if the user is a member of the Discord they may still decide to share their feedback more publicly on Twitter. The ‘Choose from Menu’ action gives them the option to post it either way. Since Discord works equally well in the native iOS/iPadOS app as on the web, we present a second choice of which avenue to use.

7️⃣ Unfortunately, due to nonexistent Shortcuts actions and no public URL scheme to be found, the best we can do is open the #follow-up channel in Safari. Or simply open the Discord app with the ‘Discord Text’ magic variable copied to the system clipboard and ready to paste.

I’m the kind of person who likes to make sure that when I’m asking something of another person — in this case, the podcast hosts — that it’s as convenient as possible for them. That means following the guidelines for submitting questions or feedback to a “T”. This shortcut has helped me format everything correctly without remembering all the syntax and without losing my train of thought. And, through building it, I learned a bit about how to use dictionaries and nested ‘If’ actions. So, I hope you find it as helpful as I have!